We're sorry, but all tickets sales have ended because the event is expired.
2019 – FEEDBACK WORKSHOP #1: THE WORLD AND THE WANT 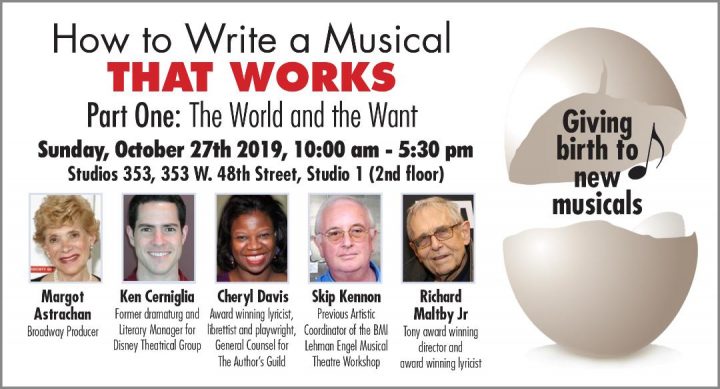 This workshop is dedicated to fostering a conversation about musical theater structure not only for writers but also for producers, directors and everyone involved in the creation and production of new works. Each workshop will accept up to 10 writing teams and/or producers who will share works in progress and get feedback from a panel of expert evaluators. Audience members will also have a chance to offer their observations, participate in discussions and networking, and enjoy coffee and refreshments.

Click for application as a writable PDF:  TRUBeginnings-HWMusical1 - fill it out, and email to TRUPlaySubmissions@gmail.com - submission fee is $10 for TRU members, $20 for non-members. Submission deadline Monday, 10/14/19.

**If accepted for presentation, in addition to the submission fee there will be a participation fee of $80 ($75 for TRU members), which includes two seats for the entire day workshop as well as a 20-30 minute presentation-plus-feedback slot. Space is limited. Any additional attendees from the musical team (including music director, additional collaborators and cast members) who wish to observe the entire workshop must reserve in advance and will be charged $25 per person. There is an additional price break for writers who presented the same show at previous parts of the How to Write a Musical workshops.

Writers or producers are invited to submit no more than the first 25 pages of a show you are working on, plus mp3s of the songs within those pages.** In "Part 1: The World and the Want" we will focus on two main aspects of your show: 1) the opening number (or any number that invites the audience into the world of the show, and sets the storytelling rules); and 2) the songs and scenes in which you introduce your characters and invite us to follow their journey. We will discuss "I want" songs, "I am" songs and "I feel" songs, and the function of each, with special attention to the way they move the action. In addition, we will continually explore the delicate balance between script and song.

Bob Ost, executive director of Theater Resources Unlimited, and TRU Literary Manager Cate Cammarata will facilitate. The TRU Selection Committee will determine what song and scene from your show we want you to present, although you may tell us your preference. We will provide a room with a piano, refreshments, panelists, and an audience.

Those selected for presentation are required to bring performers and accompanist. (We can make suggestions for locating talent, and we have music directors we can recommend.)

All writers are expected to be in attendance for the entire day, or at least the full half day session in which your work is presented.

10:15 am to 10:45 am - Discussion: how do you engage an audience in the world of your show? What constitutes an effective opening number? What does the audience need to know?

11:00 am to 1:30 pm - Five writing teams will explain their work’s overall concept (in 30 seconds or less) and present up to 12 minutes of the opening scene and song. After each presentation, panelists will provide feedback.

LUNCH BREAK (On your own. Great time to make new friends in the industry!)

2:30 pm to 3:30 pm - Discussion: How does the audience know whose story to follow? Who is the engine of your show? Do all of your characters have "wants"? Do they need to? Panelists will comment and invite additional audience feedback.

3:30 pm to 5:30 pm - Four writing teams will explain their work’s overall concept (in 30 seconds or less) and present up to 12 minutes that include the main characters' “I Want” song or songs. After each presentations, panelists will provide feedback.