We're sorry, but all tickets sales have ended because the event is expired.
2022 – (Virtual) FEEDBACK WORKSHOP #1: THE WORLD AND THE WANT 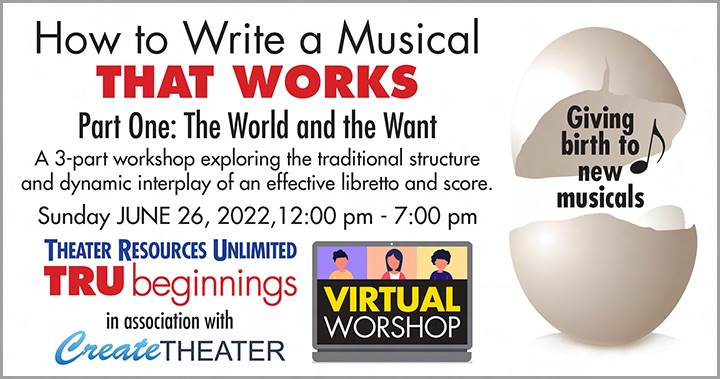 PRESENTED IN ASSOCIATION WITH CREATETHEATER.COM

In "Part 1: The World and the Want" we will focus on two main aspects of your show: 1) the opening number (or any number that invites the audience into the world of the show, and sets the storytelling rules); and 2) the songs and scenes in which you introduce your characters and invite us to follow their journey. We will discuss "I want" songs, "I am" songs and "I feel" songs, and the function of each, with special attention to the way they move the action. In addition, we will continually explore the delicate balance between script and song, so it is important that you present a continuous portion of scene and song from your show.

Click for application as a writable PDF:
TRUBeginnings-HWMusical1-newapp
fill it out, and email to TRUPlaySubmissions@gmail.com - submission fee is $10 for TRU members, $20 for non-members. Submission deadline Monday, 6/6/22.

Bob Ost, executive director of Theater Resources Unlimited, and TRU Literary Manager Cate Cammarata will facilitate. The TRU Selection Committee will determine what song and scene from your show we want you to present, although you may tell us your preference. We will provide a zoom room, access to a music director and editor, actor and director suggestions, panelists, and an audience.

Those not selected will be invited and encouraged to attend the workshop as observers. The price is $55 ($35 for TRU members). You submission fee will be applied to the Observer fee. We will be promoting this to writers, directors and producers, with the hope of generating a useful conversation to help us all develop the skills to create successful works for musical theater.

All writers are expected to be in attendance for the entire day.

12:15 pm to 12:45 pm - Discussion: how do you engage an audience in the world of your show? What constitutes an effective opening number? What does the audience need to know?

12:45 am to 3:15 pm - Five writing teams will explain their work’s overall concept (in 30 seconds or less) and present up to 12 minutes of the opening scene and song. After each presentation, panelists will provide feedback.

4:15 pm to 5:00 pm - Discussion: How does the audience know whose story to follow? Who is the engine of your show? Do all of your characters have "wants"? Do they need to? Panelists will comment and invite additional audience feedback.

5:15 pm to 7:15 pm - Four writing teams will explain their work’s overall concept (in 30 seconds or less) and present up to 12 minutes that include the main characters' “I Want” song or songs. After each presentations, panelists will provide feedback.