We're sorry, but all tickets sales have ended because the event is expired.
Adapt and Survive: How the Arts Are Outwitting COVID 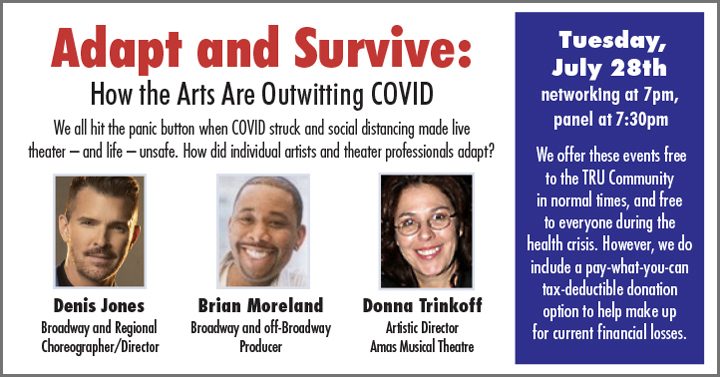 DUE TO THE CORONA VIRUS PANDEMIC, ALL TRU EVENTS ARE BEING HELD VIRTUALLY, ON ZOOM. We offer these events free to the TRU Community in normal times, and free to everyone during the health crisis. However, we do include a pay-what-you-can tax-deductible donation option to help make up for our current financial losses.

Tuesday July 28th, 7pm networking, 7:30 panel
This event will be held on Zoom.
Register on this page with any of the "pay-what-you-can" buttons in the red registration box and we will send you the Zoom link, or email TRUStaff1@gmail.com prior to the event to get link.

With guest speakers: choreographer/director Denis Jones (Tony nominations for Tootise and Holiday Inn, also Honeymoon in Vegas); producer Cody Lassen (Tootsie, What the Constitution Means to Me, Indecent, Significant Other, Spring Awakening revival; upcoming Titanic, How I Learned to Drive); producer Brian Moreland (The Sound Inside, The Lifespan of a Fact, Sea Wall/A Life; upcoming: American Buffalo with Laurence Fishburne, Blue with Leslie Uggams); artistic producer Donna Trinkoff of Amas Musical Theatre (Romeo & Bernadette: A Tale of Verona and Brooklyn, The Other Josh Cohen, Wanda's World, Zanna Don't, Lone Star Love).
We all hit the panic button when COVID struck and social distancing made live theater – and life – unsafe. How did individual artists and theater professionals adapt to this new normal? Was it a slow process or did they manage to pivot right away? What were the steps that led them from hopelessness and helplessness to some form of  action and productivity, and what have they learned along the way? And what are the best guesses about a timeframe for returning to theater as we know it, and what might be the long-term impact of this period of isolated performance on our business?
Zoom session will open at 7:00pm for roundtable introductions of attendees; program will start at 7:30pm - come prepared with your best 20-second summary of who you are, and what you need. Free for everyone, with an option of donating to help. Please use the bright red reservation box on our web page, or email or phone at least a day in advance (or much sooner): e-mail TRUStaff1@gmail.com / phone 833-506-5550
Panelists
SHARE THIS:
Twitter Facebook Google+
Scroll