We're sorry, but all tickets sales have ended because the event is expired.
Art and Activism: How Theater Can Open (and Change) Minds 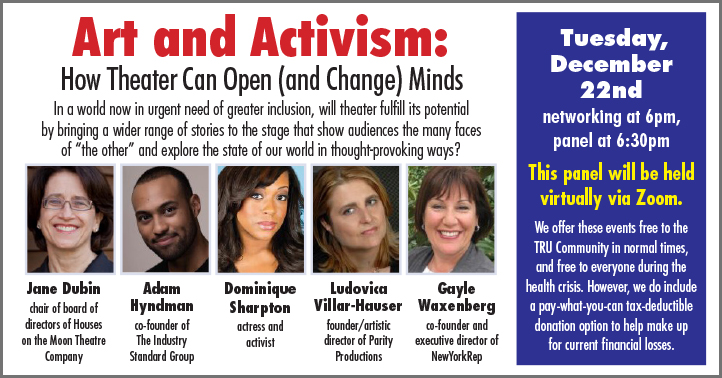 DUE TO THE CORONAVIRUS PANDEMIC, ALL TRU EVENTS ARE BEING HELD VIRTUALLY, ON ZOOM. We offer these events free to TRU members in normal times, and currently include a pay-what-you-can tax-deductible donation option for non-members, to help make up for our current financial losses.

Tuesday December 22nd, 6pm networking, 6:30 panel
This event will be held on Zoom.

With guest speakers: Jane Dubin, chair of board of directors of Houses on the Moon Theatre Company; Adam Hyndman, associate at Octopus Theatricals, board of Broadway For Racial Justice, co-founder of The Industry Standard Group; Ludovica Villar-Hauser, founder/artistic director of Parity Productions; Dominique Sharpton, actress and activist; Gayle Waxenberg, co-founder and executive director of NewYorkRep.
From its very roots in ancient classics that often shaped current as well as historic events into life lessons, to Shakespeare's portraits of royal villains and heroes, to the cool-eyed issue plays of Brecht and the agitprop of Odets, theater has always been a political medium. Even when it is not overtly political, theater can be subversively persuasive as it invites us to empathize with characters and dares us to understand human behavior in its full spectrum of moral shades. In a world now in urgent need of greater inclusion, will theater fulfill its potential by bringing a wider range of stories to the stage that show audiences the many faces of "the other" and explore the state of our world in thought-provoking ways?
Zoom session will open at 6:00pm for roundtable introductions of attendees; program will start at 6:30pm - come prepared with your best 20-second summary of who you are, and what you need. Free for TRU members, pay-what-you-can for non-members. Please use the bright red reservation box on our web page, or email or phone at least a day in advance (or much sooner): e-mail TRUStaff1@gmail.com / phone 833-506-5550
Panelists
SHARE THIS:
Twitter Facebook Google+
Scroll