We're sorry, but all tickets sales have ended because the event is expired.
Dust off Your Dreams: The Long-Awaited Return of Our Favorite Festivals 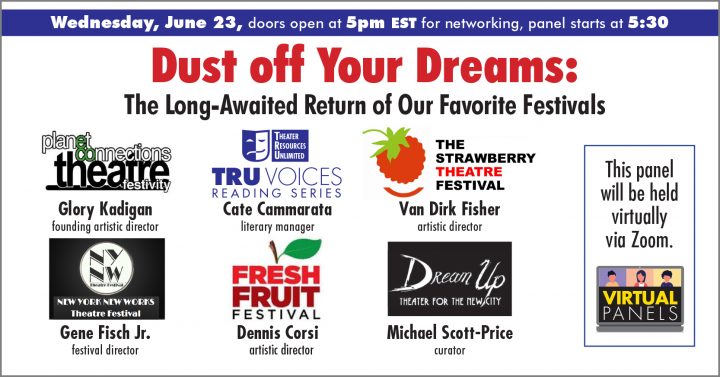 The shutdown sure changed the way we do things, and put a damper on one of our basic stepping stones for the development of new work: the festival. How did our favorite festivals weather the pandemic? Did they use this imposed time off for planning or for reinventing themselves virtually? Do they have plans for coming back? And what did they learn in the last year that they might incorporate going forward? We'll also check in on who's open for submissions, and whether their mission and guidelines have been affected by the ongoing shocks of political and social upheaval in our country.

Doors open at 5:00pm for networking and roundtable introductions of everyone in the room – come prepared with your best 20-second summary of who you are, and what you need. Panel will start at 5:30pm. Free for TRU members; $15 for non-members. Please use the bright red reservation box here on our web page, or email or phone at least a day in advance (or much sooner): e-mail TRUStaff1@gmail.com / phone 833-506-5550
Panelists
SHARE THIS:
Twitter Facebook Google+
Scroll