We're sorry, but all tickets sales have ended because the event is expired.
FEEDBACK WORKSHOP #2: CONFLICT & OBSTACLES 2018 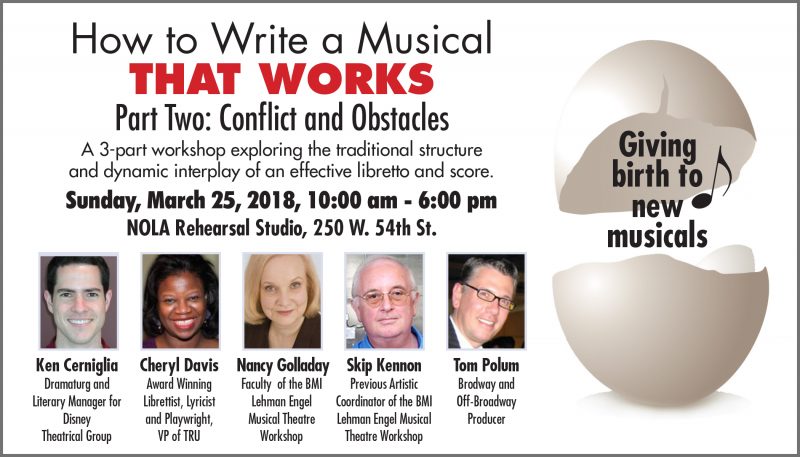 Just by presenting one song at the last workshop, it was greatly improved by the specific comments the panel made. The main character's need and "want" was made so much clearer to the audience just by the way the panel suggested I highlight it musically. So many thanks for that! ~Tom Dudzick

TRU was a very important step in getting us [to NYMF]. I am hoping to apply to the TRU workshops again in the future - they were so so helpful - you do such a good job there! ~Larry Little

This workshop is dedicated to fostering a conversation about musical theater structure not only for writers but also for producers, directors and everyone involved in the creation and production of new works. Submission fee is $10 for members, $20 for non-members. If accepted, it will be applied to a participation fee of $100 ($80 for TRU members).

Those not selected will be invited and encouraged to attend the workshop as observers. The price is $55 ($35 for TRU members). We will be promoting this to writers, directors and producers, with the hope of generating a useful conversation to help us all develop the skills to create successful works for musical theater. The cost for non-participants to attend for the full day, to observe the presentations and be part of the discussions, is $55 ($35 for TRU members). Download the application, fill it out, and email to TRUStaff1@gmail.com to sign up.

Click for application as a writable PDF:  howtowriteamusical1edit - fill it out, and email to TRUPlaySubmissions@gmail.com to sign up. Submission fee is $10 for TRU members, $20 for non-members. Submission deadline Wednesday, February 14th.

**If accepted for presentation of 10-15 minutes including one song and scene, plus feedback, there will be a participation fee of $100 ($80 for TRU members), which includes 2 seats for the entire day workshop as well as your presentation slot. Space is limited. Any additional attendees from the musical team (including music director, additional collaborators and cast members) who wish to observe the entire workshop must reserve in advance and will be charged $20 per person.

Writers (or producers!) are invited to submit no more than 25 pages of a show you are working on. We want to see the section of your show in which conflict and obstacles arise – the plot complications – plus MP3s of the songs within only those pages. Also send a concise synopsis of the opening in which you introduce the world of your show, and the want of your characters and how it prepares us for the conflict in the section presented.

In the workshop we will focus on three main aspects:

We will discuss "I am" songs and "I feel" songs, and the function of each, with special attention paid to the way they move the action. In addition, we will continually explore the delicate balance between script and song.