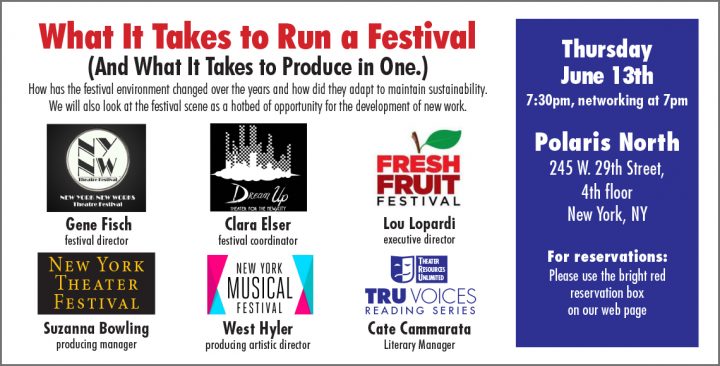 This panel will approach the festival scene from two different angles. First we'll hear the history, background and purpose of the festivals run by the guest speakers, how the producing environment perhaps has changed over the years and how their organizations adapted to maintain sustainability. Then we'll look at the festival scene as a hotbed of opportunity for the development of new work. Which festivals provide the best environment for your production? How do you submit, what are the deadlines, and what are some of the secrets to giving your submission a competitive edge? Once accepted, what is expected of you? More importantly, what goals along your developmental path can you reasonably expect to achieve from a festival showcase? And how do you distinguish yourself in the marketplace so that once you build it, they really will come?

Doors open at 7:00pm for networking and refreshments, roundtable introductions of everyone in the room will start at 7:30pm - come prepared with your best 30-second summary of who you are, and what you need. Free for TRU members; $12.50 for non-members in advance ($15 at door). Please use the bright red reservation box on our web page, or email or phone at least a day in advance (or much sooner): e-mail TRUStaff1@gmail.com / phone 833-506-5550