We're sorry, but all tickets sales have ended because the event is expired.
Life on Hold, and What We Do in the Meantime 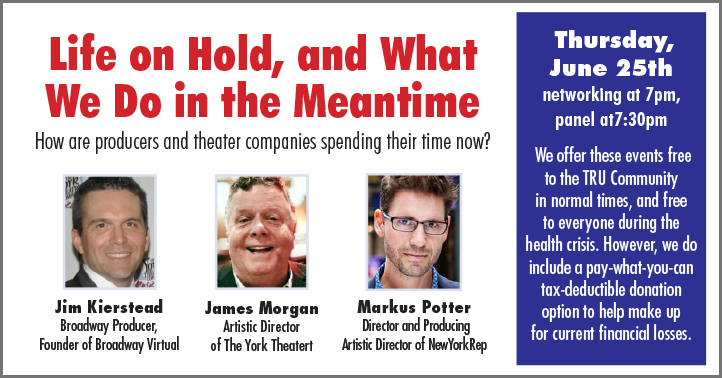 DUE TO THE CORONA VIRUS PANDEMIC, ALL TRU EVENTS ARE BEING HELD VIRTUALLY, ON ZOOM. We offer these events free to the TRU Community in normal times, and free to everyone during the health crisis. However, we do include a pay-what-you-can tax-deductible donation option to help make up for our current financial losses.

Thursday June 25th, 7pm networking, 7:30 panel
This event will be held on Zoom.
Register on this page with any of the "pay-what-you-can" buttons in the red registration box and we will send you the Zoom link, or email TRUStaff1@gmail.com prior to the event to get link.

With guest speakers Jim Kierstead, producer(Hadestown, The Inheritance, Ain't Too Proud, Mrs. Doubtfire, Tony Award winner Pippin revival, M, Butterfly, Indecent, Natasha Pierre..., Sunset Boulevard, Kinky Boots, Waitress; off-Broadway Thrill Me, Yank!) and founder of Broadway Virtual; James Morgan, artistic director of The York Theater; and Markus Potter, director and producing artistic director of NewYorkRep, an off-Broadway theatre company with the mission of developing and producing new plays and musicals that inspire and compel social change.
How are producers and theater companies spending their time now – are they looking for and reading new plays for the 22-23 season? How far out are they planning?  Are they using virtual platforms for development, and is that working? What will happen to the shows that have been put on hold, and how do you plan a season with so many unknown factors at play? What types of musicals/plays do they think the public will be hungry for once we can congregate again in a theater: new plays/musicals, old standbys, plays about the pandemic? Who will be in the audiences in the decade of the 20s – has virtual presentation possibly engaged new and younger theatergoers, and will they stay with us once we come back live?
Zoom session will open at 7:00pm for roundtable introductions of attendees; program will start at 7:30pm - come prepared with your best 20-second summary of who you are, and what you need. Free for everyone, with an option of donating to help. Please use the bright red reservation box on our web page, or email or phone at least a day in advance (or much sooner): e-mail TRUStaff1@gmail.com / phone 833-506-5550
Panelists
SHARE THIS:
Twitter Facebook Google+
Scroll