We're sorry, but all tickets sales have ended because the event is expired.
Town Hall (live): What Producing Companies Need Now 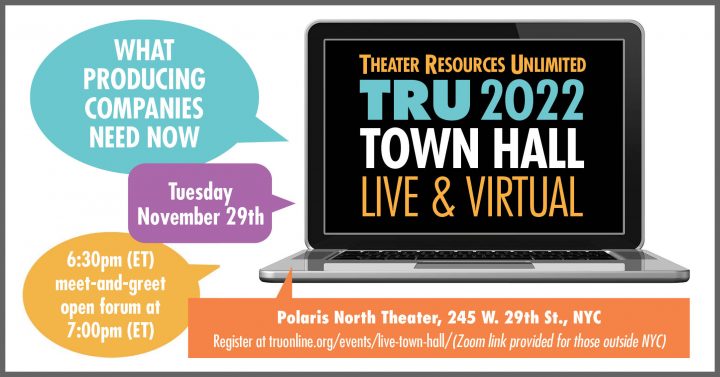 Our return to our live monthly panels/discussions, with a simultaneous streaming for our friends outside of New York City. (Everyone should receive the zoom link when you register. If you don't receive it, email TRUnltd@aol.com to request link.)

As part of a multi-tiered initiative to help restore the theater community in New York and beyond, TRU is inviting small-to-medium sized producing companies to join us in an honest conversation about the struggle to reopen. Last year's virtual meeting generated some specific concerns from the community. Chief among these was the need to find out what audiences require to return to theater. Now that protocols are relaxed and policies are changing from venue to venue, have audiences returned? What are some successful strategies companies are using to rebuild their audiences? Are safety precautions increasing costs? How many performance spaces survived the shutdown, and are new spaces being created? Are the pre-pandemic contracts and agreements in effect going forward, and if not, what are the new agreements we are working with now? And are we taking the lessons of virtual into our future?

Companies are encouraged to talk about the impact of shutdown and their plans for or experience with already reopening, with a particular focus on finding solutions to any obstacles holding them back. TRU offers this as an opportunity for companies to learn from and find ways to help each other while exploring programs that might better serve producing companies. Though the focus will be on not-for-profit and fiscally sponsored companies, all companies struggling to return to live performance are welcome to participate in this conversation.

Doors open at 6:30pm for networking and roundtable introductions of everyone in the room – come prepared with your best 20-second summary of who you are, and what you need. The Open Forum will start at 7:00pm. Free for TRU members and not-for-profit theater companies; $15 for non-members. Please use the bright red reservation box here on our web page, or email or phone at least a day in advance (or much sooner): e-mail TRUStaff1@gmail.com / phone 833-506-5550