We're sorry, but all tickets sales have ended because the event is expired.
Meet the Coaches 2021 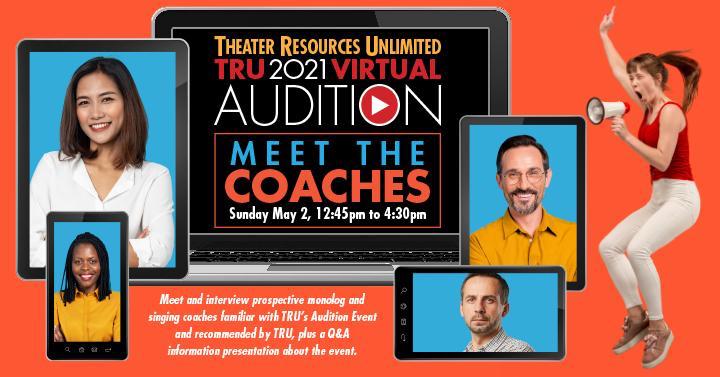 Sunday May 2, 1:00 to 5:00 (check-in at 12:45) - eastern time
A virtual workshop on Zoom. Register to be sent the Zoom link.
FREE for all actors who apply to the TRU Audition, $30 for all others (fee can be applied to Audition registration)
NOTE: IF YOU DON'T RESERVE BY 12:30PM SUNDAY, WE WON'T BE ABLE TO SEND YOU THE ZOOM LINK.

We want all actors to do their best at our audition, and all auditions. And we firmly believe that even the most experienced actor needs an outside eye to help shape their audition pieces. Trust us - the room can tell who has been coached and who hasn't. It makes a huge difference. That's why we offer this annual opportunity for you to meet a lineup of recommended coaches who want nothing more than to make you shine! Monolog and music coaches, plus accompanists, will tell you about their methods, then you'll have the opportunity to meet each in a one-on-one conversation. So you'll get the "vibe" and a better sense of how well you'll work together.

Reservation required: purchase your spot using our red ticketing block above left (or scroll way way down on your devices). Or email TRUActors@gmail.com with questions.

I am always thrilled to see what a positive successful experience it turns out to be when I do something with TRU.  I really appreciate your values and substance in the way that things take place. It was such a pleasure and a great day with the students and hearing and speaking with the other coaches! ~Shira Flam, vocal coach

I learned so much and spoke with so many wonderful and talented professionals. I am so glad to be a part of this! ~Gloria Bangiola, actor

Thanks again for including Ryan and myself (MCS) on the panel of meet the coaches. We met great people and it was good to hear what the other coaches had to say. ~Matthew Corozine, monolog coach

This was a wonderful event today - so well organized and run, and the caliber of the coaches was terrific - thanks for including me! ~Gillien Goll, monolog coach

Everyone was so nice.  I really enjoyed meeting the coaches.  I feel like I got a lot from yesterday.  I am going to work with Valerie and Bob on my monologues. I am so excited! ~Maggie Davern