We're sorry, but all tickets sales have ended because the event is expired.
It Doesn’t Have to Be #MeToo: Sexual Harassment Education and Prevention for Theater 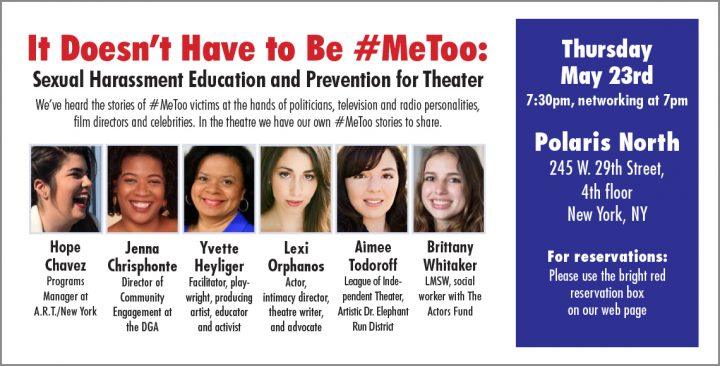 We’ve heard the stories of #MeToo victims at the hands of politicians, television and radio personalities, film directors and celebrities.  In the theatre we have our own #MeToo stories to share.  The casting couch is very real and not just reserved for women — men have their own stories!  This workshop is three-fold-- going from the personal, to educational, to advocacy; followed by a Q & A.  Artists will share stories of harassment and misconduct; followed by a power point presentation recognizing and fighting harassment; followed by a panel of representatives from a theatrical organizations who will share what they are doing to empower their members and prevent harassment, misconduct or assault in the theatrical work space.

Content Warning: This session will include conversations about sexual harassment and abuse. While no graphic details will be shared, we offer this warning in case conversations of this nature are a trigger for any guests. Your self-care is our priority and you may step out of the event at any time if you are uncomfortable.
Doors open at 7:00pm for networking and refreshments, roundtable introductions of everyone in the room will start at 7:30pm - come prepared with your best 30-second summary of who you are, and what you need. Free for TRU members; $12.50 for non-members in advance ($15 at door). Please use the bright red reservation box on our web page, or email or phone at least a day in advance (or much sooner): e-mail TRUStaff1@gmail.com / phone 833-506-5550