We're sorry, but all tickets sales have ended because the event is expired.
New Year, New Rules: The Updated Equity Agreements and Contracts 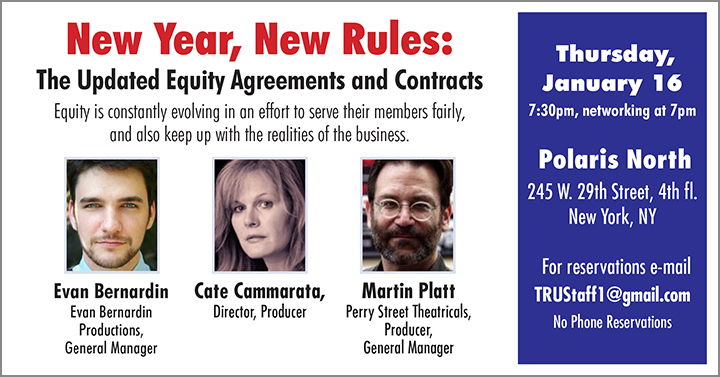 Equity is constantly evolving in an effort to serve their members fairly, and also keep up with the realities of the business. There have been some recent new understandings that have come to light, as well as some new interpretations of existing rules, and all of it will impact the way we approach early development of new work. This panel will help us learn about the new Equity development contracts: Tier 1, 2 & 3. What do they mean? How do they replace the previous terms "Workshop," "Laboratory," and other developmental contracts? Equity is changing their rules, and every producer needs to be up to speed on what the new rules are.

Panelists to include general manager Evan Bernardin of Evan Bernardin Productions (National Tours of Million Dollar Quartet, Charlie Brown Christmas Live; Off Broadway Afterglow, Must, Diaspora, Counting Sheep); TRU literary manager Cate Cammarata, director, producer (My Life Is a Musical, The Assignment, My Father's Daughter), Martin Platt of Perry Street Theatricals (Dames at Sea on Broadway, Vanya & Sonia & Masha & Spike; off-Broadway, Bedlam's Hamlet/St. Joan, Sense & Sensibility, Georgie, an oak tree, In the Continuum; Lend Me a Tenor the musical in London).
Doors open at 7:00pm for networking and refreshments, roundtable introductions of everyone in the room will start at 7:30pm – come prepared with your best half-minute summary of who you are, and what you need. Free for TRU members; $13.00 for non-members ($16 at the door). Please use the bright red reservation box on this page, or call at least a day in advance (or much sooner) for reservations: 833-506-5550, or e-mail  TRUStaff1@gmail.com
Panelists
SHARE THIS:
Twitter Facebook Google+
Scroll