We're sorry, but all tickets sales have ended because the event is expired.
Not-for-Profit Theater in a Challenging World: How to Survive and Thrive 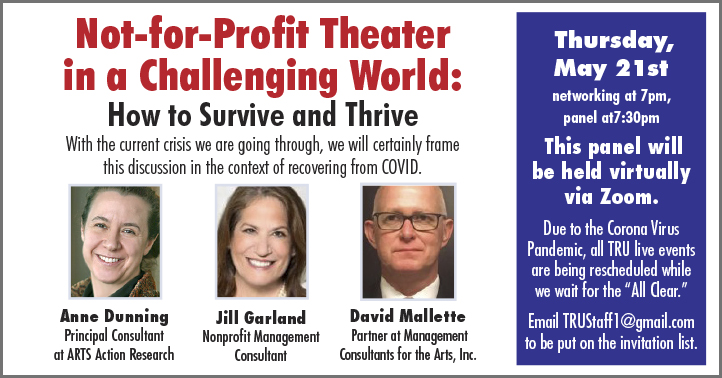 DUE TO THE CORONA VIRUS PANDEMIC, ALL TRU LIVE EVENTS ARE BEING RESCHEDULED WHILE WE WAIT FOR THE "ALL CLEAR." Meantime we are presenting virtual events, free to the TRU community. Stay tuned. And stay healthy!

Thursday May 21st, 7pm networking, 7:30 panel
Unless we have assurances that social gatherings are safe once again, this event will be held on Zoom. Register on this page with any of the "pay-what-you-can" buttons in the red registration box and we will send you the Zoom link, or email TRUStaff1@gmail.com prior to the event to get link.

With guest speakers Anne Dunning, principal consultant at ARTS Action Research; Jill Garland, nonprofit management consultant; David Mallette, partner at Management Consultants for the Arts, Inc. With the current crisis we are going through, we will certainly frame this discussion in the context of recovering from COVID. Other basics we will cover: nurturing and strengthening not-for-profit theater companies: the importance of understanding the shifting environment for the not-for-profit arts ... clearly defining and focusing on your unique vision and purpose ... flexibility and adaptability as critical components of success ... building partnerships and collaboration around shared resources as a strategy for recovery ... broad-based resource building and more. Come with questions for these extremely learned panelists, some of the top advisors in the not-for-profit arts world.

Zoom session will open at 7:00pm for roundtable introductions of attendees; program will start at 7:30pm - come prepared with your best 20-second summary of who you are, and what you need. Free for everyone, with an option of donating to help. Please use the bright red reservation box on our web page, or email or phone at least a day in advance (or much sooner): e-mail TRUStaff1@gmail.com / phone 833-506-5550