We're sorry, but all tickets sales have ended because the event is expired.
Theater in a Changing World: Time to Get Off the Blocks? 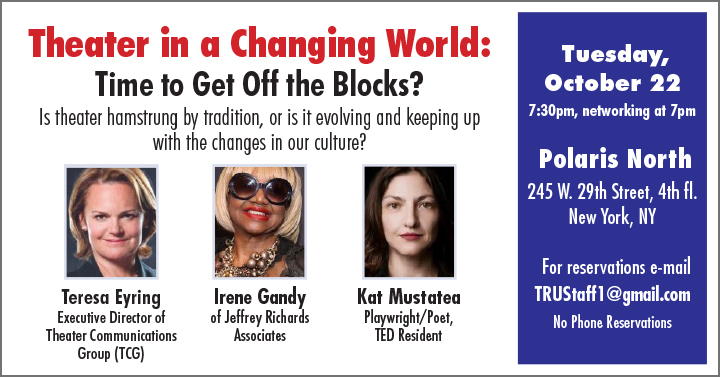 Panel to include Teresa Eyring, executive director of Theater Communications Group (TCG); legendary press agent Irene Gandy of Jeffrey Richards Associates (The Great Society, American Son, The Heidi Chronicles and You Can't Take It with You revivals, Lady Day at Emerson's Bar & Grill, The Realistic Joneses, All the Way); and Kat Mustatea, playwright/poet, TED resident ("the meaning of art in an age of machines").

Is theater hamstrung by tradition, or is it evolving and keeping up with the changes in our culture? Speakers from the commercial, regional and indie worlds will consider the need to stay relevant in this age of technology ... how to attract young audiences as well as diverse audiences ... the trend to rethink classics for new audiences and how far we should go with revisionism rather than create new works ... other trends, healthy or un- ... the degree to which theater can be a force for change ... the need for greater diversity within the business itself. And a look at the shifting emphases in press and marketing.
Doors open at 7:00pm for networking and refreshments, roundtable introductions of everyone in the room will start at 7:30pm – come prepared with your best half-minute summary of who you are, and what you need. Free for TRU members; $13.00 for non-members ($16 at the door). Please use the bright red reservation box on this page, or call at least a day in advance (or much sooner) for reservations: 833-506-5550, or e-mail  TRUStaff1@gmail.com
Panelists
SHARE THIS:
Twitter Facebook Google+
Scroll