We're sorry, but all tickets sales have ended because the event is expired.
Practical Playwriting: How to Write for Commercial Production 2020 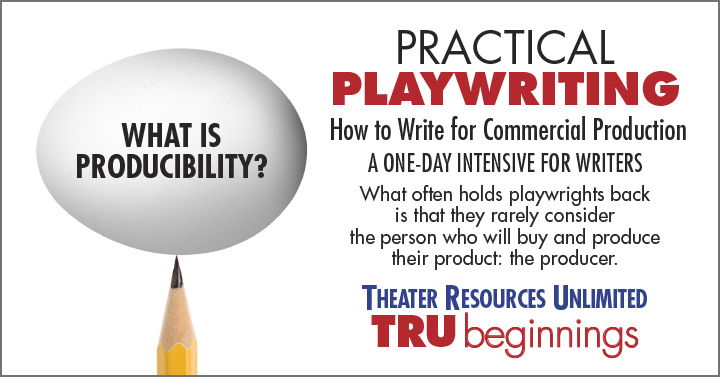 What often holds playwrights back is that they rarely consider the person who will buy and produce their product: the producer.  With all the work, hope and sweat they invest in considering character, theme and plot, playwrights rarely take into account producibility.

This one-day intensive will be taught by TRU Literary Manager Cate Cammarata and commercial producer Patrick Blake (The 39 Steps, My Life Is a Musical, Bedlam Theater's Hamlet/St. Joan, The Exonerated, In the Continuum, Play Dead)  founding artistic director of Rhymes Over Beats, with TRU's Bob Ost and Gary Hughes offering marketing insights. With guest speakers including producers Margot Astrachan (The Prom, A Gentleman's Guide..., Nice Work If  You Can Get It, On a Clear Day... revival, The Realstic Joneses), and producer/consultant/former general manager R. Erin Craig of La Vie Productions (Himself and Nora, Stalking the Bogeyman, Mr Rickey Calls A Meeting, Austen's Pride, Academy); and entertainment attorney Lee Feldshon.

• WHAT IS PRODUCIBILITY? The fact that producers always ask this question, and playwrights hardly ever do, causes a serious disconnect between the commercial producer and most playwrights.

• WRITING TO A MARKET - We will ask each playwright questions he or she has probably never considered before: What is your market? Who is going to buy tickets? Who is this play written for?

• HOW TO SPEAK "PRODUCER" - Understanding the producer's point of view, and learning to look at your work from a more objective perspective may increase your chances of getting produced.