We're sorry, but all tickets sales have ended because the event is expired.
Raising Money for Theater 2021: Who, How and When to Ask 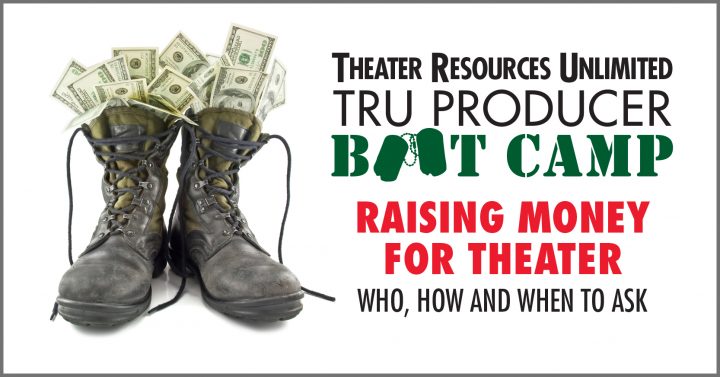 Saturday, January 23, 12pm to 7:30pm
Retooled for virtual participation during the current pandemic.

The world has been on hold since last March, but hope is on the horizon at last. At least we have a vaccine! It's time to prepare for the return of live theater – it's more important now than ever for the voices of theater to be heard. Get ready to move ahead with passion and a plan, and an awareness of how to navigate our current virtual world to move your project forward. For producers, one important step is finding the money and resources to make it all happen. We invite you to acquire some basic tools and crucial information that will help you to overcome your money shyness (and virtual roadblocks) and effectively reach out to supporters. From pitching techniques and presentation skills to legal requirements and business planning, plus a wealth of first-hand experience from a half dozen producers who are currently active in the Broadway and off-Broadway worlds, we promise you an informative, empowering and inspiring day.

Workshop faculty will include (confirmed so far): producers Bruce Robert Harris and Jack W. Batman (Be More Chill, Gary: A Sequel to Titus Andronicus, King Kong, American Son, Carousel, Present Laughter, Natasha, Pierre..., On The Town); Jane Dubin (The Prom, Tony winning The Norman Conquests, An American in Paris, Farinelli and the King, Bandstand, Peter and the Starcatcher, Absolute Brightness of Leonard Pelkey, The 39 Steps, Ann); R.K. Greene (Peter and the Starcatcher, The Lightning Thief tour, Farinelli and the King, A Time to Kill, Cougar the musical, Room Service); Cody Lassen (Tootsie, What the Constitution Means to Me, Indecent, Significant Other, Spring Awakening revival; upcoming Titanic, How I Learned to Drive); James Simon, producer/investor (Pippin, The Velocity of Autumn, The Play that Goes Wrong), and Cheryl Wiesenfeld  (Ain't Too Proud, The Great Society, 4-time Tony winner for All the Way, Vanya & Sonia & Masha & Spike, The Gershwin's Porgy & Bess, Elaine Stritch: At Liberty). Plus entertainment attorney Lee Feldshon and Eric Goldman, and financial advisor Bailie Slevin of Entertaining Finance.

1:30 to 2:00pm - "Why Is This Show Likely to Succeed: Making Your Case with an Effective Business Plan" with R.K. Greene. Your business plan is your blueprint for success, and a compelling sales tool when approaching investors. It helps you understand your project and how best to pitch it. RK will offer a flexible template covering all the basic areas of information you need to include, as well as offering guidance in creating a plan that is professional looking and appealing.

2:45 to 3:15pm - "The Investor Perspective" with producer/investor James Simon. How an investor's interest in a project may differ from an associate producer's, why he invests, and best ways to make your ask so it maintains his interest.

3:45 to 4:30 - "Cultivating and Maintaining a Pool of Investors" with Bruce Robert Harris and Jack W. Batman. Who to go to, what to talk about, how to present material, disclosures and much more. Identifying prospective investors is just the first step. How do you communicate your passion for a project, incentivize a prospect and close the deal? PLUS the business and hierarchy of theatrical producing: definitions of lead producer, co-producer, investors, and appropriate lingo, budgets, capitalization, and recoupment charts.

5:30 to 6:30 - "Where Do We Go from Here?" - an inter-active talkback moderated by Cheryl Wiesenfeld with Jane Dubin, R.K. Greene, James Simon. How do we plan for the future with so many unknown factors? What can we do now to prepare ourselves for the return of live theater? Panelists will share their current projects and plans, where they are now and how they are dealing with the current roadblocks. Followed by a Q&A with attendees.