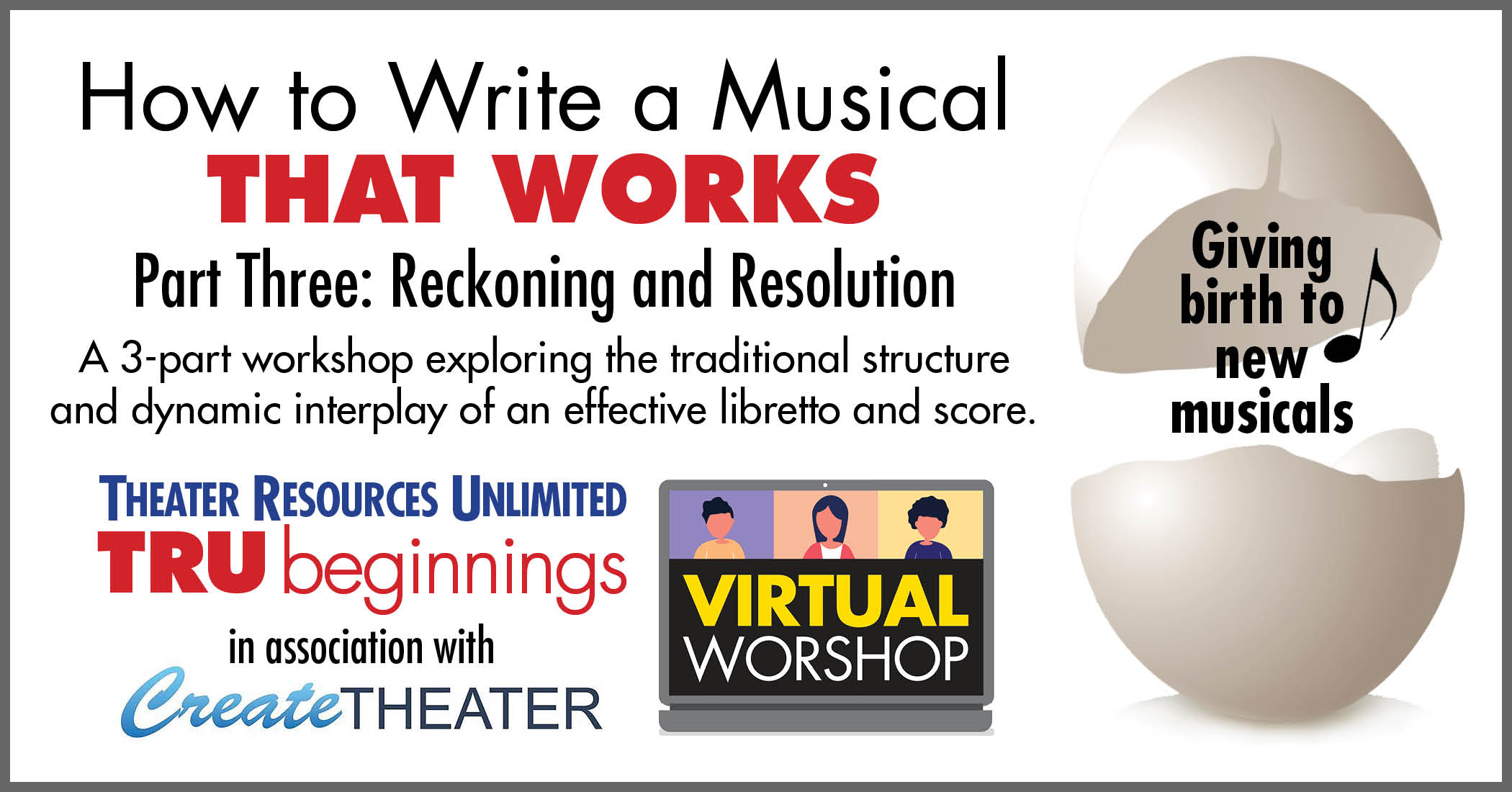 "Part 3: Reckoning and Resolution" will focus on the last scenes of a musical and how songs help resolve the story and the characters' journeys: 1) songs that express the resolution of a character's "want," or the overcoming of obstacles, and how it leads to a final choice; 2) "eleven o'clock numbers," the big dramatic show stopper that sums up the (usually) main character's journey; 3) the finale, an effective and emotionally satisfying way of concluding your story. We will discuss the function of songs, with special attention paid to the way they move the action. In addition, we will continually explore the delicate balance between script and song.

Up to ten teams will present a song and scene from their shows to a professional panel of commercial producers, directors and writers, including:

Writers (and producers!!!) are invited to submit no more than 25 pages of a show you are working on. We want to see the last section of your show in which we head towards the summing up and conclusion of the plot and the resolution of the characters' wants. Include MP3s of the songs within only those pages. Also send a concise synopsis of the preceding action of the show, and how it leads to the resolution in the section presented.

Submission deadline: Wednesday, 3/15. Download application: TRUBeginnings-HWM3-app, fill it out, and email to TRUPlaySubmissions@gmail.com to sign up. Submission fee is $10 for TRU members, $20 for non-members. If accepted, it will be applied to a participation fee of $100 ($85 for TRU members). Prices are discounted for those who have taken previous parts of this workshop.

The cost for non-participants to attend for the full day, to observe the presentations and be part of the discussions, is $55 ($35 for TRU members).

**If accepted, you will present 10-15 minutes including one song and scene, followed by about 15 minutes of feedback. There will be a participation fee of $100 ($80 for TRU members), which includes 2 seats for the entire day workshop as well as your presentation slot. Because space is limited, any additional attendees from the musical team (including music director, additional collaborators and cast members) who wish to observe the entire workshop must reserve in advance and will be charged a nominal $25 per person.

NEW! We will provide you with a music director and tech person at TRU's expense; or reimburse your expenses up to $100.

12:15 to 1pm - Discussion: How do you bring the action of your show to an effective dramatic (and musical) conclusion? Is resolution better served by song or by dialogue? Do all shows need a big "eleven o'clock" number, or are there other ways to leave an audience emotionally satisfied?

1:00 pm to 3:00 pm - Five writing teams will explain their work’s overall concept (in 30 seconds or less) and present 10-15 minutes of a song and scene that demonstrates a resolution of the show's major conflict or a coming to terms for one of the characters, the resolution of their ongoing "want." After each presentation, panelists will provide feedback.

3:30 pm to 4:15 pm - Discussion: The dramatic journey of characters: how wants and goals may evolve over the course of a show. Panelists will comment and invite audience feedback.

4:15 pm to 6:15 pm - Five writing teams will explain their work’s overall concept (in 30 seconds or less) and present 10-15 minutes of a song and scene that musicalizes the action leading to the resolution, or leads up to (and includes) a satisfying finale that leaves the audience with a sense of completion.