We're sorry, but all tickets sales have ended because the event is expired.
Redefining Yourself in a Pandemic (and Supporting Theater in a Changing Environment) 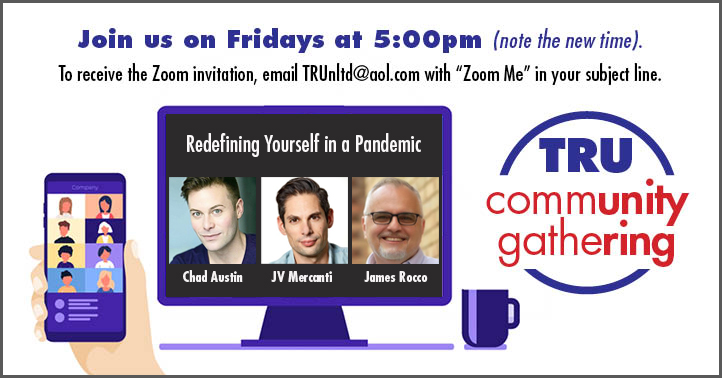 Community Gathering on Zoom - register with the bright red reservation box to receive the Zoom link. These gatherings are a service for the theater community and are offered free for TRU members; we ask that non-members help keep us running by making a donation or joining as a member.

Friday 6/24 - In the room: Chad Austin, director, choreographer, Artistic Director of Abingdon Theatre and principal in The Twenty Nine Hour Venture which provides an artistic space for writers to hear their work; JV Mercanti, director, principal in The Twenty Nine Hour Venture; James Rocco, director, choreographer, former Producing Artistic Director of the Ordway Center for the Performing Arts, founder of Thirty Saints Productions (Come from Away, Magic Mike, creator of The Broadway Songbook Series) and the newly formed Thirty Saints Music Licensing which facilitates music clearances for stage shows. What prompted a pivot for these successful theater directors, and how can they support you in your future success?