We're sorry, but all tickets sales have ended because the event is expired.
Writer-Producer Speed Date 10-13-19 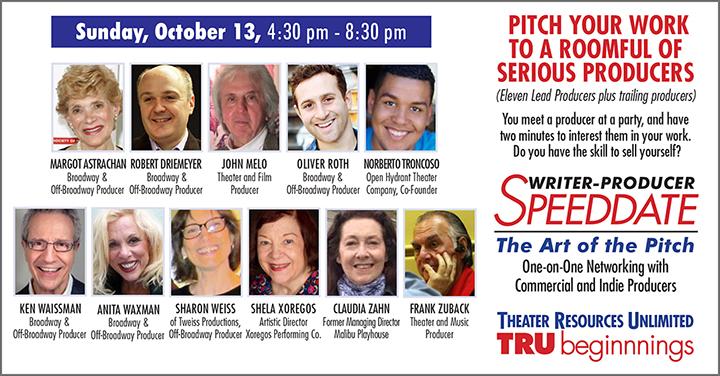 You meet a producer at a party, and have two minutes to interest him in your work. Do you have the skill to sell yourself? Here's a chance to practice your pitching with real producers who are open to and interested in meeting you. Okay, they probably won't option you on the spot, but they'll give you valuable feedback about your work and your ability to talk about it. And you'll have the opportunity to start developing a relationship. And that's what this business is all about. Relationships.

The Speed Date is the only event I know of that gives writers the chance to meet high level producers one-on-one in a room. To me, that's what makes the Speed-Dates so valuable. And you do it with kindness, which I value in life. ~Vincent Amelio (How Alfo Learned to Love)

Click here: WriterSpeedDateApp-85-75 for application. Please fill out and email to TRUStaff1@gmail.com (PLEASE - add your name to the document name, and put it first when you "save as").

We'll have eleven producers lined up, from both the commercial and not-for-profit worlds, all with an interest in new projects; we also may have eleven aspiring producers from our Producer Development program. So you'll be pitching to as many as 22 producers in total! Come with a willingness to learn, because the real value is the chance to practice your pitching. And you'll be getting invaluable coaching from experts, as well. And did we mention the wine and snacks afterwards?

I participated in TRU's Writer's Speed Date Pitch session last year, and got a LOT out of it! I found it so motivating to have a deadline to create production assets and prepare myself for meeting producers. My partner and I worked tirelessly for days before the event to make sure we were in top form before presenting (as writers) to the "producers" on hand. My experience was one of the rare occasions where several producers expressed real interest in my work. Later, one attended my reading, and followed up with a coffee meeting to talk financing. We're still in touch. Again, this is never promised, but it does happen for some of us. In my opinion, the price of $85 for all that value is a BARGAIN! ~Ed Zareh (Long Lost John)

I've had follow-up meetings with two people I met from the event. and provided scripts to three others. I also met some fellow playwrights, and through a chain of introductions coming out of that, I'm now working on a possible film deal in Los Angeles.  If you have a project where you'd like to practice and receive feedback on your pitch; potentially make some connections that would be useful for script development or early production; and meet some other playwrights – this is an ideal opportunity. ~William Roetzheim