We're sorry, but all tickets sales have ended because the event is expired.
Essentials of Successful Self-Producing 2022 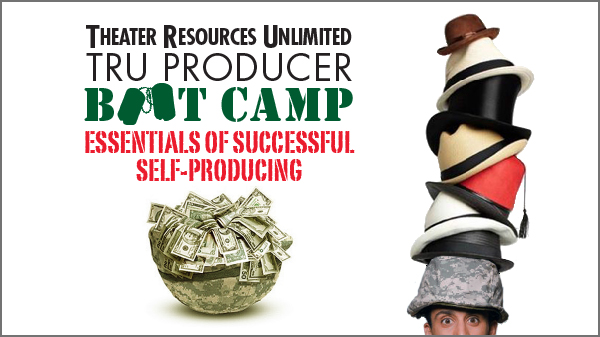 Sometimes you've just got to jump in and be more than an artist to make theater happen. "I'm just an artist" no longer cuts it when you make the move from page to paying audience – you are now the CEO of your brand!  In this groundbreaking half-day workshop we will look at how artists can successfully take on the challenging role of "producer" to generate their own opportunities. The ones who are most successful have to master a range of business skills, don a variety of hats, and learn to be expert jugglers.

Come learn to view your creative work from a business perspective and understand the need to think differently. Make smarter choices, not only now but also for the future of your show. It all seems a little overwhelming at times, but we will break it down into easily digestible bites. When you know what you're doing, it can actually be fun and fulfilling! Cost: $125, $85 for TRU members (see red registration box on this page).

"I just want to thank you for the amazing workshop you put on yesterday. It was the best six hours I have ever spent on Zoom …  I was so riveted by all the speakers that I didn’t collapse until after it was all over.... I have been taking other workshops as well, but these particular speakers presented super useful information in a very relatable form – not too didactic or formal, but also without a lot of filler. Just straight-up, useful information." ~Daphne White (in CA)

"I can't thank you enough for the opportunity today. It was just so informative and inspiring!" ~Angela Polite

Led by TRU executive director and writer-producer Bob Ost. Guest speakers will include:

1:30-2:30 “Planning Ahead and Making it Happen” with producer Blair Russell