We're sorry, but all tickets sales have ended because the event is expired.
TRUSPEAK … Hear Our Voices! 2022 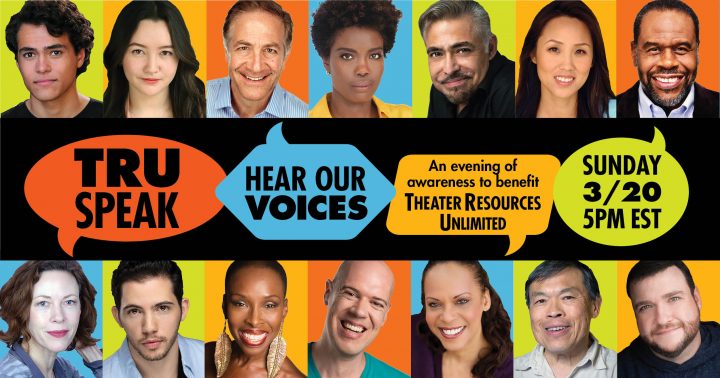 and Stephanie Pope Lofgren as the Voice of TRU

Buy your ticket using the bright red reservation box.
Click here to offer added support
or upgrade to a VIP ticket ($25 or more):

Join us for our annual fundraising gala reinvented for virtual times. This is an evening to raise awareness of current social issues, as well as awareness of the work TRU has been doing for the theater community for over 28 years. And to honor the work of CATE CAMMARATA and the legacy of VAN DIRK FISHER. We are presenting a curated selection of 7 short plays we have matched with directors, producers and technologists, to create high quality video performances of these provocative pieces:

• VIP ticket is $90 ($75 for TRU) includes post-show after party -
meet the actors, creative teams and TRU Board and past Honorees

• Circle of Angels tickets are $100, $250, $500, include the above
plus thank you credit in waiting room, opening and closing credits.

*Anything above the basic ticket price is a tax-deductible donation

We received over 130 submissions, and we congratulate the following 10 finalists, 7 of which we will be presenting (see above):

Every Creeping Thing by David Beardsley
Good Bad Times by Diana Burbano
Obstacle by John Busser
She's Blown Away by Vince Gatton
The First Anti-Vaxxers by James McLindon
Only Black by Kristy Thomas
I Could See, a Raging Revolt by Ajene D. Washington
Cold Bread by Aladrian Wetzel
Slave Trade by Ian Patrick Williams
My Father's Father by Marie Yuen

Additional congratulations to the following additional semi-finalists - this was an amazing array of work, all addressing significant topics in effective and dramatic ways. We were truly overwhelmed!