We're sorry, but all tickets sales have ended because the event is expired.
What TRU Can Do for You: A Free Introduction to Our Community 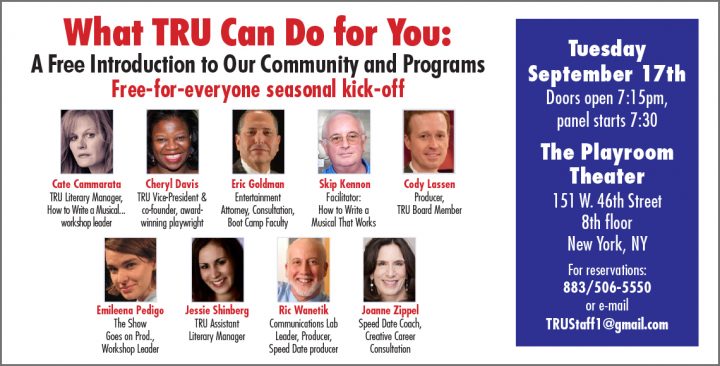 Tuesday, September 17th season opener
Doors open 7:15pm, panel starts 7:30
The Playroom Theater, 151 W. 46th Street, 8th floor
Come to our free-for-everyone seasonal kickoff and networking meet-and-greet. And meet the program directors and illustrious board members of Theater Resources Unlimited that make it possible to bring you the range of programming we offer for producers and artists. Our confirmed lineup includes TRU Vice-President and co-founder Cheryl Davis, award-winning playwright, attorney, General Counsel for The Authors Guild, and feedback panelist for How to Write a Musical That Works; Board member Cody Lassen, producer (upcoming How I Learned To Drive, Indecent, Spring Awakening revival; producing team of Tootsie, What the Constitution Means to Me, The Band's Visit, Significant Other); TRU Literary Manager Cate Cammarata (How to Write a Musical That Works) and assistant Literary Manager Jessie Shinberg; Emileena Pedigo of The Show Goes on Productions, who will be leading upcoming workshops; Skip Kennon, former Artistic Coordinator of the BMI Lehman Engel Musical Theatre Workshop, who now helps facilitate TRU's How to Write a Musical That Works workshop; and Ric Wanetik, producer (Tony nominated Twilight Los Angeles: 1992, Broadway’s Marlene, Off-Broadway’s Jolson and Company) who helps run our Director-Writer Communications Lab and is often a Speed Date producer. Plus two of the three people who offer free consultations to new members: entertainment attorney Eric Goldman, and career consultant Joanne Zippel of Zip Creative.
Learn about our programs, including our Producer Development & Mentorship Program, Raising Money for Theater, Essentials of Successful Self-Producing and other Producer Boot Camps, Writer-Producer Speed Date, Director-Writer Communications Lab, How to Write a Musical That Works workshop and more. And let us know what we don't offer that you wish we did.
Doors open at 7:15pm for networking and refreshments, roundtable introductions of everyone in the room will start at 7:30pm - come prepared with your best half-minute summary of who you are, and what you need. Free for TRU members; usually $12.50 for non-members, but free for everyone for this season opener. Please use the bright red reservation box on this page, or call at least a day in advance (or much sooner) for reservations: 833-506-5550, or e-mail  TRUStaff1@gmail.com
Panelists
SHARE THIS:
Twitter Facebook Google+
Scroll