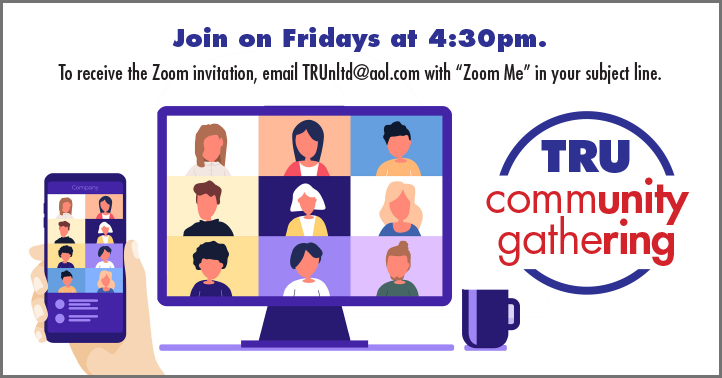 Join us Fridays at 4:30pm for weekly virtual Community Gatherings, conversations about creativity and theater in the time of COVID-19, led by TRU executive director/founder Bob Ost. These gatherings are free for TRU members; we ask that non-members consider making a donation to TRU to help keep us running during these challenging times, or join as a member. You can view past conversations below, or visit our YouTube Channel.

To receive the Zoom link for each week's conversation, email TRUnltd@aol.com and use the word "Zoom" creatively in your subject line.

Friday 7/30 - Growing Pains: Starting, Maintaining and Evolving a New Theater Company.  In the room: founder/producing artistic director Magaly Colimon-Christopher of Conch Shell Productions (presenting Caribbean-American and Caribbean Diaspora voices); founder and executive producer Carolyn Harrison of Good Light Productions (opportunities for underrepresented voices); founder and executive Fred Rohan-Vargas of Mixing It Up Productions (multi-media entertainment company). So many missions, so many companies. And so many choices, starting with whether a not-for-profit or commercial model is best for achieving your goals. Which means understanding your goals. Join us for an honest look at how these companies first came to be, and how they defined and structured themselves as they found their identity and their community. And how greater inclusion is at the heart of their missions. CLICK HERE to register, and receive the Zoom link.

Friday 8/6 - What TRU Can Do for You (and How We Can Do It Virtually). Moderated by TRU Board Chair Sandy Silverberg. In the room: Cate Cammarata, TRU literary manager, facilitator of How to Write a Musical That Works; Jane Dubin, program director for our Producer Development and Mentorship Program; Tamra Pica, tech magician behind the Writer-Producer Speed Date; Ric Wanetik, facilitator for the Director-Writer Communications Lab; Patrick Blake, facilitator of the Practical Playwriting workshop. Learn how TRU can help your development as a theater professional, with a focus on 5 of our key programs. Meet the people who run these programs and learn more about how they can not only help you hone your skills but also help you navigate the business more successfully. How have these programs adapted to virtual presentation? What are the pluses and minuses? And will we stay virtual or go back to live programming? CLICK HERE to register, and receive the Zoom link.

Friday 8/13 - How a Pandemic Brought New Perspectives to Theater. Moderated by Emileena Pedigo of The Show Goes On Productions.  The shutdown was a mixed blessing in some ways. It forced us to look at things through a different lens. We had to come up with creative new ways to present our work, adapt to a new medum and reach new audiences. We had to adapt our mindsets around money: how to measure value, set ticket prices, prep "the ask," and balance art and business. And many non-profit companies were pushed to reconcile mission-driven passion with operating a sustainable Arts business, whether for one project or a whole season. What are the lessons learned? CLICK HERE to register, and receive the Zoom link.

PREVIOUS 2021 CONVERSATIONS
(CLICK HERE for 2020)
Friday 7/23 - NFP and NGO: How Some Non Profit Theater Companies Extend Their Mission and Work.  In the room: co-founder and executive/artistic producer Carolyn Brown of True Colors Project/My True Colors Festival, founding executive director Jesse Fahay of Ripple Effect Artists, founding and artistic/executive director Ludovica Villar-Hauser of Parity Productions, co-founder and artistic director Emily Weiner of Houses on the Moon. Some not-for-profit theater companies extend their mission beyond performances, and offer a range of services and support for specific communities. Sometimes this drifts into the realm of an NGO, a nonprofit organization that operates independently of any government, whose purpose is to address a social or political issue. How do the two parts of their identity amplify each other? Are there any stumbling blocks that this structure might incur? And how much of their time and donations are allocated to community work, and how much to performance?
Friday 7/16 - The Challenges of Running a Not-for-Profit Theater Company (Especially During a Shutdown).  In the room: artistic director Teri Black and resident director Valerie Adami of Break a Leg Productions; interim co-artistic director and workshop director Meghan Crosby of American Renaissance Theatre Co.; executive and artistic director Judith Estrine of Prism Stage Company. We'll hear the histories and missions of these four companies and learn about their infrastructure and survival strategies, as well as the how the shutdown has effected their operations, any adjustments they may have made for virtual performance and their plans for re-emerging into live production.

Friday 7/9 - How Broadway Records Kept the Music Playing Throughout the Shutdown.

In the room: Van Dean, Tony and Grammy Award-winning Broadway producer and the president and co-founder of Broadway Records talks about how his company survived, pivoted, and even expanded during the pandemic. Including high-profile COVID-inspired projects like best-selling author Jodi Picoult's Breathe musical, the all-star home-recorded Artists in Residence, a new collaboration with NY Theatre Barn of recordings of new works in development, Ahrens & Flaherty's Legacy, If The Fates Allow: A Hadestown Holiday Album, the Averno magical transmedia Universe of musicals and a current initiative with Black Theatre Coalition for an upcoming Black Writers Amplified, an album consisting entirely of new works by Black musical theatre writers. CLICK HERE to watch the YouTube video - subscribe to our channel!
Friday 7/2 - An International Perspective: What in the World Is Happening to Theater?  In the room: Australian producer Neil Gooding (Australian premieres of Gutenberg! The Musical!, and Dogfight and New York productions of Church and State, Handle with Care, The 39 Steps, Alan Cumming’s one-man Macbeth on Broadway; upcoming production of Back to the Future in London); UK producer Ramin Sabi, award winning theater and film producer (London: The Prince of Egypt, Olivier Award winning Company, Gypsy  with Imelda Staunton, Nativity the musical; NY: upcoming Company, The Ferryman, 1984). We're finally heading back to live performance here in New York. London and Australia have had their ups and downs, with reopening attempts long before ours. How has that worked? We'll meet two producers who have dealt with – and are dealing with – getting shows back up in what we hope is the post-pandemic era. CLICK HERE to watch the YouTube video - subscribe to our channel!
Friday 6/25 - Interviewing the Interviewer: Meet Multi-Media Personality Jim Masters. In the room: Jim Masters, TV & radio personality, host, correspondent, spokesperson, anchor, voice talent, writer, producer, marketing & lifestyle expert. With years of Live and scripted TV and radio professional broadcast experience, Jim made a COVID pivot in April 2020 and became host and executive producer of The Jim Masters Show LIVE!, an entertainment talk show series broadcasting live worldwide 7 days a week. He'll share stories of the celebrities he has interviewed, and his observations of how COVID has affected our industry and pushed us to adapt and evolve, and how he himself has changed in these last 15 months. CLICK HERE to watch the YouTube video - subscribe to our channel!
Friday 6/18 - Way More Than a Platform: A 360° Approach to Story Development. In the room: entrepreneur and award-winning artist Peter Rafelson of ElectraCast and marketing expert Mark Netter, co-founder of this new 360° content company focused on inspiring and connecting people, creating a better world through compelling entertainment and storytelling, developing content along multiple verticals and mediums, spinning off hit podcasts into film and television adaptations, and connecting entertainment with social impact goals. CLICK HERE to watch the video on YouTube - subscribe to our channel!
Friday 6/11 - The Regional Perspective, 5: A Tale of Two Theaters (and the Return to Live Performance). In the room: Joe Grandy, consulting producer of the Cape Playhouse in Cape Cod, and Daniel C. Levine, Artistic Director of ACT (A Contemporary Theatre) of Connecticut. Two very different theater companies: one just a few years old, the other a part of theater history since 1927. The shutdown impacted them each in very different ways. How did they maintain their audience bases, and perhaps even increase their visibility during COVID, and how is each approaching the return to live performance? CLICK HERE to watch the video on YouTube - subscribe to our channel!

Friday 6/4 - Politics and the Arts: Being the Change. In the room: Leslie Boghosian-Murphy, running for City Council in NYC District 3, former investigative journalist and SAG-Aftra member; Jeffrey Omura, running for City Council in NYC District 6, actor, activist and second-term officer of Actor's Equity; Jeff Gold, State Committee Member and Manhattan Chapter Officer of the Working Families Party of NYS; Stephanie Pinto, political activist. A conversation about their personal journeys merging art and politics, insights into understanding how to work within "the system" and the importance of letting your voice be heard. Rarely are the arts even mentioned in most campaign speeches. Here are people who are passionate about helping the arts claim their place among the many cultural shifts that are needed for a healthy recovery from a year of shutdown.

Friday 3/5 - Thinking in Zoom (2): Producers and Technologists. In the room: producers Maureen Condon, Jonathan Hogue, Stephanie Pope Lofgren and Claudia Zahn, and technologists Iben Cenholt of RuneFilms and Carley Santori. A conversation with producers and technicians of the TRUSpeak ... Hear Our Voices! benefit. A look at the newly defined relationships, and dynamics, in this new working environment, and the stumbling blocks and solutions along the way.

Friday 2/26 - Thinking in Zoom: How Directors Adapted to a New Medium. In the room: directors Cate Cammarata, Van Fisher, Jessica Garrou, Glynn Borders plus tech coordinator Iben Cenholt of RuneFilms. A conversation with four of the directors, and the tech coordinator of the TRUSpeak ... Hear Our Voices! benefit, and how they conceived, collaborated and created something new and exciting using the strengths of virtual presentation.
Friday 2/19 - More Alternatives to Live Theater: Podcasts and Radio Drama. In the room: Claudia Catania of Playing on Air, a radio program and podcast, dedicated to sharing great short theater with the public. With short plays written by some of the country’s top playwrights. Plus initiatives to help educators across the country share the power of great theater.
Friday 2/12 - Addressing Social Issues, and Making Art, from a Distance. In the room: Anne Hamburger of En Garde Arts, a company dedicated to Art and Artists programs that reflect a fundamental emphasis on equity, diversity and inclusion; and how that mission is fulfilled safely during the current shutdown. Including current EnGarde efforts to return to their site-specific roots, with plans for activating loading docks, storefront windows, front stoops and more and creating opportunities for countless artists and technicians.
Friday 2/5 - Partnerships, Industry Initiatives and Other Constructive Responses to the Shutdown - with Carla Hoke-Miller, founding director of the first Theater Industry Department within NYC  government. Outlining partnerships, responses to the shutdowns due to the Pandemic, and industry initiatives to address equity and inclusion upon recovery. Including the City Council's Open Culture bill to encourage performances in public spaces.
Friday 1/29 -  The Limitations, Possibilities and Best Uses of Virtual Performance: A Conversation. In the room: Jane Dubin, producer (The Prom, Tony winning The Norman Conquests, An American in Paris, Peter and the Starcatcher; off-Broadway The Absolute Brightness of Leonard Pelky, 39 Steps) and board chair of Houses on the Moon Theatre Company; R.K. Greene, producer (Peter and the Starcatcher, The Lightning Thief tour, Farinelli and the King, A Time to Kill; upcoming Beau the musical); Jeremy Handleman, producer (Tony Award nominated for John Leguizamo’s Latin History for Morons and the revival of On the Town; plus the Off Broadway rock musical comedy Brooklyn Crush, formerly F#%king Up Everything). We continue exploring the frustrations of art during COVID, and how to make the best use of this time.