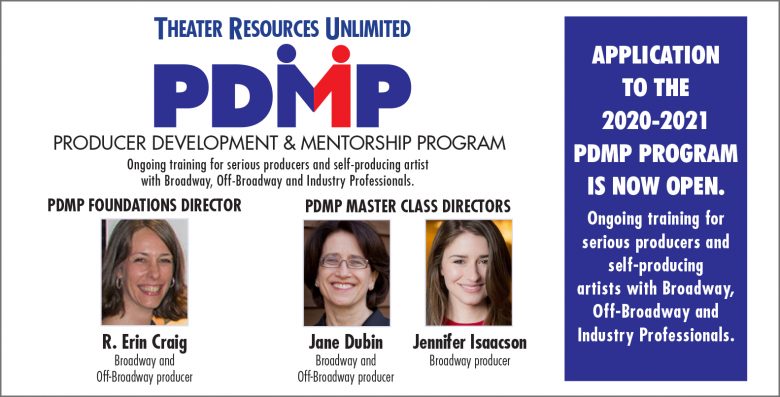 ONGOING TRAINING FOR SERIOUS PRODUCERS AND SELF-PRODUCING ARTISTS
WE ARE NOW OPEN FOR SUBMISSIONS TO THE 2020-21 SEASON.
Classes will be held virtually until the shutdown ends,
and students from beyond the New York area may continue to attend virtually.
Submission deadline for both classes is Tuesday 9/1 – email TRUMentor@gmail.com

FOUNDATIONS is open to everyone interested in producing; MASTER CLASS is open for graduates of the Foundations Class, with limited openings for people who have taken previous TRU workshops, or the Commercial Theatre Institute 14-week course, or a combination of other CTI courses. To request an application for Master Class, or to inquire about the program, email TRUMentor@gmail.com. Download Foundations (Basic Class) application here: PDMP.Intake.Form2020-21 fill out and email to TRUMentor@gmail.com (be sure to add your name to the document name when you send it). Also send a resume emphasizing your theater and business experience.

Click here to pay for your PDMP upgrade, if accepted.

Finances a concern? Payment plans can be arranged, and limited financial aid available. Click here for our Scholarship Application (a limited number of partial scholarships are available). Email TRUMentor@gmail.com with questions.

The 2020-21 FOUNDATIONS CLASS will be led by producer/consultant/former general manager R. Erin Craig of La Vie Productions (Himself and Nora, Stalking the Bogeyman, Mr Rickey Calls A Meeting, Austen's Pride, Academy, Right Before I Go benefit in October 2017).  An associate instructor will be announced soon.

The 2020-21 MASTER CLASS for Basic PDMP graduates and other eligible candidates will be led by Broadway producer Jane Dubin (The Prom, Tony winning The Norman Conquests, Farinelli and the King, Bandstand, Peter and the Starcatcher and An American in Paris; plus Absolute Brightness of Leonard Pelkey, The 39 Steps, Ann; upcoming: Fingersmith) and Jennifer Isaacson, producer (Moulin Rouge!, An American in Paris, Hedwig and the Angry Inch starring Neil Patrick Harris, ANN, The Norman Conquests; off-Broadway The 39 Steps, Beebo Brinker Chronicles).

Foundations Price: $295 for new members, $245 for returning members and students. The program will meet one evening of each month from October through July - that's 10 sessions ($29.50 per session). You must also be a paid member of TRU, currently $95/year.

Master Class Price: $425 for new members. Limited to 12 full participants. (Adjunct memberships available - you attend all sessions on a non-participating auditor basis, $295.) Meets once a month from October thru June – 9 sessions (less than $50 per session). You must also be a paid member of TRU, currently $95/year.

Candidates may be asked to come in for an interview.

IF YOU HAVE BEEN ACCEPTED INTO THE PROGRAM, YOU MAY PAY FOR IT HERE.

Foundations PDMP Upgrade, first time mentorship member, $295
(you must also be a current TRU member and accepted into this program)
click this button:

Foundations PDMP Upgrade, returning mentorship member or student, $245
(you must also be a current TRU member and accepted into this program)
click this button:

PDMP Master Class Upgrade – participating level, $425
(you must also be a current TRU member and accepted into this program)
click this button:

PDMP Master Class Upgrade - adjunct/auditor level, $325
(you must also be a current TRU member and accepted into this program)
click this button:

Thursday August 20th, 5:00pm Zoom meeting – reserve using the bright red ticketing window on this page, and we will send you the Zoom link! On August 20 from 5:00pm to 7:30pm, we will be hosting a free meet-and-greet info session about our Producer Development and Mentorship Program, the only theater production program to offer […] 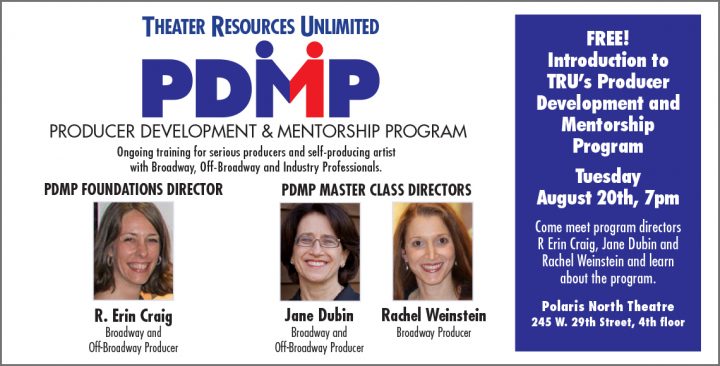 Wednesday August 22nd, 6:00pm CHANGE OF VENUE (we had to move to a bigger space because of popular demand) THE PLAYROOM THEATRE, 151 W. 46th Street, 8th floor, NYC On August 22 from 6:00pm to 8:30pm, we will be hosting a free meet-and-greet info session about our Producer Development and Mentorship Program. Prospective applicants will […]